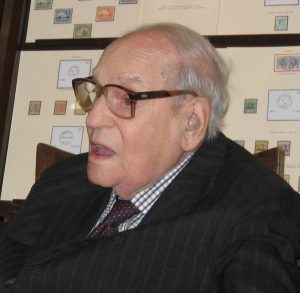 Our President, Victor Toeg died on the 28th of July after a short illness. He was 94.
Victor Toeg was born in Shanghai, China, in 1916. As a young boy, his parents sent him over to England with a governess to be educated, and he attended a preparatory school at Seaford, Sussex. He went on from there to Clifton College where he excelled at sport, becoming a very good tennis player and a fine cricketer. Whilst at the school, he broke a batting record and was presented with a silver trophy which is in his son’s possession to this day.
After leaving school, he progressed to Lincoln College, Oxford to study Law. After graduation, the War intervened and he joined the RAF. It always amused him to relate his abortive attempt to train as a pilot; an attempt doomed to failure because of his height! After several different postings, he ended up in Gibraltar with the force guarding the rock. Thankfully, it was never attacked. After the war, he returned to London, married and joined a firm of solicitors in Holborn, namely J. Tickle & Co., where he progressed to become a partner. He worked there for 30 years before retiring in 1978.
He then went into business as a stamp dealer with his wife Lettie, trading as ‘E. V. & L. TOEG’. Close observers of past Bulletins will notice that when he became a dealer, he had to resign from the Royal as was the requirement in those days, and thus drop the ‘FRPSL’ after his name. He was reinstated as a Fellow some time after his business ceased trading, in common with many stamp businesses at that time.
Victor had been a member of the BWISC from its inception in 1954; he joined the Committee in 1962 and was elected Vice-President in 1965. He took over as Acting President in late 1967, following the death of Geoffrey Groves and was confirmed in that position at the AGM the following year. The 41 years of Victor’s tenure as President were marked by an expansion in membership and the acceptance by the whole philatelic community of the BWISC as the foremost society dealing with BWI philately. Most members’ memories of Victor came from meeting him at the bi-ennial BWISC Convention which he faithfully always attended; there he was always willing to spend time encouraging younger members and sharing his extensive knowledge. After having openheart surgery in 1995, he later decided that he could no longer participate as much as he would like in the organization of the Circle. In consultation with the then Committee, it was decided that the positions of President and Chairman would be separated, and Victor would continue as President in an Honorary role. He remained President until his death; the last time he attended a meeting was in 2004 at the Royal Philatelic Society celebrating the 50th Anniversary of the Study Circle, an event which gave him much pride.
Newer members of the Circle may not be aware of the extent of Victor’s achievements as a BWI collector. Most will have seen the Robson Lowe auction catalogue of his outstanding Antigua, that had won Gold a few months earlier at the 1990 London Exhibition, but this was not his complete Antigua collection, as additional interesting pieces (e.g. fiscals, forgeries and flaws) were offered separately. Only this August a GV flaw was offered on eBay, still on a piece written up in his neat solicitor’s hand. But until 1966 he collected the whole BWI and sold most of it to concentrate on three specialised areas. Then in 1971 he sold his very fine Leeward Islands in a major auction whose timing was unfortunate as it just preceded the 1970s boom and eventual bust. In 1983 Victor decided to focus solely on Antigua when he sold his Montserrat, first the small but select postal history, which included the famous ‘Montserrat Paid’ soldier’s envelope, now in the Army Museum, and in March 1984 the stamps, including proofs and essays in abundance. Again, however, some items were sold separately, one being the famous marginal block of the QV 4d blue with CA watermark bought for him by Bill Lea in the first Charlton Henry auction. In later years he collected Lady Boat covers and BWI forgeries, and was an active bidder in the Circle’s auctions. Indeed, Victor was a true all-rounder who was able to appreciate the finer points of BWI philately.
So it was not so strange that he became the author of the Dominica handbook even though it was not a specialised collecting area of his; he based it on notes left by Philip Saunders, founder of the Study Circle. It was published in 1995. His other work was the Leeward Islands Adhesive Fees Stamps, published in 1991. Although he never wrote any books about his specialised subjects of Montserrat and Antigua, he wrote many thorough and detailed articles about them in the Bulletin.
Victor’s wife, Lettie predeceased him in 2003 and he is survived by his son, Nigel, to whom we extend our heartfelt sympathy.