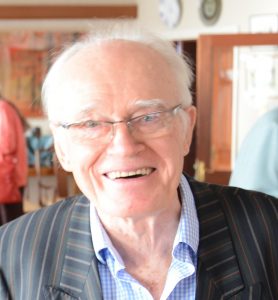 The Philatelic World was shocked to learn of the passing of Graham Booth on 15 December 2021, who died at home peacefully in his sleep, just eleven days after his 88th Birthday. In the month beforehand he had attended the SPH weekend at York and made his customary visit to the USA to spend Thanksgiving with his sailing friend Greg and his family.
After the many trials imposed by the pandemic in the last two years, Graham had much to look forward to in 2022 having agreed to do a number of local society displays in December and January prior to giving a major display to the Royal Philatelic Society London on West Indies Maritime Mail, and had four entries in the London 2022 Stamp Show; sadly none of this will now happen.
Graham was born on the Wirral in 1933 and retained a life-long affection for Liverpool and Lancashire, even calling his boat the Red Rose. His parents moved him between a range of schools in Lancashire before finally settling him at King George V Grammar School, where he did extremely well. He went on to be head boy and win a place to read economics at St John’s College Cambridge, a subject he claimed was of no use to him in later life, though one suspects it may have assisted him in formulating principled arguments in support of whatever he was trying to achieve.
His business career started with Unilever, then with Bowater Scott in the UK before moving to become President of Scott Taiwan and then running a major pulp and paper subsidiary in Mexico, at one point he was responsible for some 10,000 staff. A very busy and peripatetic life. He married twice, the first marriage produced two sons Paul and Simon to whom he may have been closest in his later years and he had three grandchildren, Matt, Beth and Ella. Whilst long separated from his wife Cath, who lives in Spain, they remained good friends.
Upon retirement from his work in Mexico he moved to the Cayman Islands, enjoying his boat and rediscovering philately, starting with the Cayman Islands. Whilst on Grand Cayman a dealer suggested there was a story to be told from the records in the Cayman Archives. Graham’s work took 18 years to come to fruition, but all can be relieved that his book Crisis in the Cayman Islands Post Office was published by the Stuart Rossiter Trust in 2020. This is a book of interest to anyone seeking to understand the administration of the smaller island colonies and shows Graham’s real love of history, which he often felt he should have read instead of economics.
Graham returned to the UK in 2003 having as he put it ‘realised the limitations of permanent sun, sand and water*-, which must be true as he retired to a wonderful penthouse apartment in Worthing where the beach is stony! On his return he was an enthusiastic participator in many philatelic societies, achieving prominent roles locally in Sussex, becoming a fellow of both the Society of Postal Historians and the Royal Philatelic Society London, and rising to be President of the British West Indies Study Circle, hosting a successful Study Circle conference as recently as October.
He first started exhibiting in 2004 and being competitive by nature soon realised the joy that philately offers as compared to other collecting hobbies in that not only can you show your treasures off, but you can win things! Graham won the best first time entry in that show and went on to produce several gold medal exhibits culminating in a number of large golds in recent years including two at Stockholmia 2019 in celebration of the Royal Philatelic Society’s sesquicentenary - one for The rise and fall of the American Merchant Marine as a Trans Atlantic Mail Carrier 1800-1868’ and one for ‘Anglo-Australian Mail 1840- 1860: The Transfer from Sail to Steam’. He was well known too for his range of one frame exhibits, generally on a maritime theme. When you reflect that he was about to show 47 frames of West Indies Maritime Mail to the Royal in January, you will begin to appreciate how much maritime mail he had acquired over the years.
His pages were always immaculately researched and had a very distinctive style so that those who collect in this area will be remembering Graham for many years to come. His column in the BWISC Bulletin on the state of the auction market was the first thing many turned to when the magazine, or its electronic version, arrived. He presided over the Study Circle with immense wisdom and took painstaking care to resolve thorny issues. Graham’s gregarious nature showed in the way he made so many philatelic friends and his regular phone calls and company will be much missed.
Simon Richards