It is my sad duty to report to the membership the passing of Derek Nathan on 11 November last. Derek had been an active member of the Study Circle for some 26 years and had served as the Circle Librarian from 1989 until 2002, as Chairman from 1999 to 2003, and finally as Vice-President. Derek’s interest in philately had been born at an early age as both his father and grandfather had been keen collectors. As we all know, his collecting interest was British Guiana. Despite his renown as a specialist collector in the very highest circles of the hobby, he spent much time visiting Stamp Fairs, large and small, in search of as-yet-undiscovered postmarks pertaining to the Colony. Derek, and his wife Mary attended many Study Circle functions and when he displayed his collection, we were all struck by its breadth and quality.

My first recollection of Derek was when I first joined the Study Circle, he asked what my collecting interest was; I replied that it was Trinidad. He recovered very quickly from this reply and suggested that my time would be much better spent collecting British Guiana. I took his advice, which I have never regretted, only to discover later that he had been looking for someone to whom he could divest himself of his surplus material! We spent much time at his home in New Malden poring over his latest acquisitions and examining my (more modest) purchases. We tried not to get in each other’s way bidding at auction. However, on one occasion this didn’t work. Derek had informed me some time before that he had ceased dealing with a certain auction house due to some argument that he had with them. It so happened that they had a rather appealing proof for sale and I decided to attend the auction in person. Unfortunately, there was a book bidder who seemed more keen (more moneyed?) than I, and I failed to win the lot. A few weeks later, whilst visiting Derek, he was keen to show me a new purchase. Imagine my surprise when he brought out the self-same proof that I had been bidding on. When I remonstrated with him that I was the under-bidder and had probably made him pay much more than he needed to, he said that a certain auctioneer friend had joined that auction house and that he trusted him!

One area where he was most helpful to both the Study Circle and your Publications Officer was in his proof reading of our publications. Both he and Mary spent much time on this and could spot not only errors in spelling and grammar, but also many factual impossibilities! Derek was always supportive of the Circle’s publication ambitions.

Derek fell ill in 2002 and was not much seen for a while, but when we held our 50th anniversary celebrations in 2004, we were all pleased and surprised to find, on our arrival at the restaurant where we were to have dinner that evening, Derek standing, yes standing, at the bar offering to buy us a drink. I am sure that his recovery was subsequently helped when, the following day, his lot at our auction (est. £5,000–£5,500) sold for £20,000! This, I am sure, is a record for a specialist society auction, a record which is unlikely to be broken for many a year. It is witness to the quality of his material.

After being employed by several firms, Derek went into the printing business for himself and made a great success of it. Early on, he used to deliver the printing himself throughout London; this gave him an almost unrivalled knowledge of the city, as those of us who have been driven there by Derek can attest.

Derek leaves his wife, Mary and children, Timothy and Sara, as well as four grandchildren; he was immensely proud of all of them, and to them we extend our condolences and sympathy. 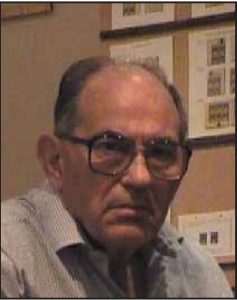